A few weeks ago I decided to watch Master Of None on Netflix. I didn’t even know who Aziz Ansari  (the main character in the show) was until I came across an interesting interview with him on Twitter. The interview was about the success of the wildly popular, Emmy winning show and the reason he is taking a social media hiatus.  While I was reading the interview I laughed a few times and thought, man, this guy is pretty funny! Who is he? And what is this Master Of None show? 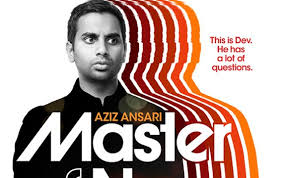 For this reason, I decided to give Master Of None a shot, and after the first episode, I was… hooked!  I pretty much binge-watched the show from beginning to end. I was SO into it! It’s funny, well-written and covers so many topics related to society today such as racial and cultural issues, dating, and more. In short, the show just feels so authentic.

I love when a show feels real and relatable. When I can watch something that tackles some deeper issues but it can also make me laugh at the same time. Now that’s my kind of show!

In addition, when I’m into something, I just have to share with others. I do this with books,  although I never get them back which makes me kind of sad, so I think I ‘ll just stick to recommending the books instead of shoving it in their face and saying, “here, you should really read this!”

The great thing, however, about trying to get someone to watch a Netflix show I’m really into is: I don’t have to worry about never seeing it again!

So I managed to get some family members and a friend on board with this show. I get immense satisfaction knowing they like it! I’ve watched the Emmy winning, Thanksgiving episode on season two FIVE TIMES! Each time I watch it with others I laugh like it’s my first! ( I won’t give this episode away, I think you should just watch it yourself and you’ll see why I love it so much).

Admittedly a while back I was the girl who didn’t watch anything and when people would conversate about these awesome shows they are watching I couldn’t relate. But now I get it! When you’re really into a show you like, you want other people to give it a shot too!

So how did I persuade my family members to watch Master Of None with me?

My youngest daughters are too young for the content. I didn’t take much convincing, however, for my teenage daughter to watch the infamous Thanksgiving episode because I kept raving about it! I think she was really intrigued when I explained to her that the episode is super funny but it also covers things like homosexuality, coming out, racism, and even homophobia -things that are still prevalent today.

During the episode, my daughter howled with laughter, (there are some pretty funny scenes)  and then she told her friends they should watch it too! My husband thought it was well-written and he brought it up with some friends while we were out for dinner.

But aside from the laughter in that Thanksgiving episode, it was the real, raw, vulnerable and clever way it was written. It was brilliant and one of the best things I’ve watched in a long time.

All in all, it didn’t take much convincing! (Maybe they were just sick of me talking about how they should watch it!) LOL

Have I convinced you?

How do you convince your family members to watch the shows you like? If you have a hard time persuading them below are a few prompts from Netflix to help you out!

*I’m part of the Netflix Stream Team. All opinions expressed are my own!